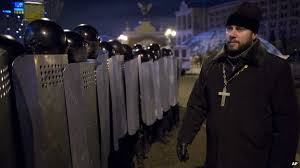 THE ROLE OF POLICE IN NEWLY-EMERGING DEMOCRACIES

Ukraine is back in the news again. Here’s the latest from Time on last night’s events:

On Tuesday night, police in Ukraine began to storm the protest  camp in the center of the capital, Kiev, using water canons, tear gas,  truncheons and rubber bullets. In the course of the day, which was the most  violent in Ukraine’s 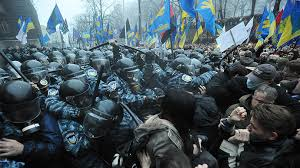 post-Soviet history, 20 demonstrators were killed reportedly alongside seven members of the security forces.  But the dilemma now facing the state and the police is far more complicated than  clearing a city square filled with thousands of people. They also have to  dislodge the intricate community of revolutionaries that has taken root there  over the past three months. In the space of roughly 10 city blocks, the uprising  has established a city within a city, a barricaded fortress with its own police  force, its own economy, its own hospitals, a parliament, a  cathedral, even a library and, most importantly, its own political ideals. Those  cannot be chased away with rubber bullets… [Read more.]

This is an interesting situation for a new democracy and its police. The Ukranian Constitution reads:

“Human rights and freedoms shall be inalienable and inviolable.” [Article 21]

In light of the growing (and violent) public protest in Ukraine, how does their Constitution and the notion of civil rights play among their police?

Granted that in recent years Ukraine has not had the opportunity to practice democracy as much as it would have liked to have practiced it. Old ways die slowly. And that especially goes for how police in a free society are to respond to public protest.

Nevertheless, Ukraine is a democracy. It doesn’t have two centuries of drawn-out experience as we have had. And for most of us, democracy means freedom. Like all societies, Ukraine has police to keep the peace and protect the civil rights. But what happens when police become the arm of the state to the detriment of the electorate? What happens when police are believed to have abrogated the civil rights of citizens? How are police to act in a society that claims it is “free and democratic?”

These are important questions and ones in which all police in a democratic form or government may one day have to face. And it’s not to early to start thinking about it.

In a challenging way, I would often cite the following scenario when teaching young police leaders: “A crowd of starving people are breaking into a bakery. What do you do? If your boss says ‘shoot them!’ will you? What could you do instead?”

The following is an OpEd column from a recent article in the New York Times by Yuri Andrukhovych. It may provide some direction if not answers.

KIEV, Ukraine — It has been severely cold here lately, with temperatures dipping below freezing night after night. What sustains the protesters at Independence Square in weather this bleak can only come from inside: an exceptionally hot mix of despair, hope, self-sacrifice and hatred.

Yes, hatred. Morality does not forbid hating murderers. Especially if the murderers are in power or in direct service of those in power — with batons, tear gas, water cannons, rubber bullets, and, starting Jan. 22, live ammunition.

That day, the news came about the first two protesters to be shot and killed by the police since the protests began in November…

If anyone is promoting hatred it is the government. My friend Josef Zissels, chairman of the Association of Jewish Organizations and Communities of Ukraine, and vice president of the World Jewish Congress, wrote a few days ago that the website of Berkut, the special police force (and a final line of defense for the powers that be) had been “flooded with anti-Semitic materials that allege that the Jews are to blame for organizing at Maidan,” the central square, which has become synonymous with the protests.

Mr. Zissels wrote: “This is completely absurd, but those who are armed with batons and shields, now facing the protesters, believe this. They are brainwashed into believing that the Maidan is a Jewish project, and thus there is no need to take pity on anyone — you can beat them all.”

Beat them all. The police have beaten women and children, and even priests trying to intervene to stop the bloodshed. Berkut not only beats; it maims, tortures and kills. Its members like to pounce on individuals who have gotten separated from the crowd of protesters. Some have even posed for the cameras, their boots on the heads of victims lying on the ground. They proudly upload these photos and videos to their personal pages at social networking sites…

The abuses by the ruling authorities, and their escalating use of violence, have threatened to make the Constitution a joke…

Our national anthem says, “We will lay down our body and soul for our freedom.” On Jan. 19, the protests turned violent. But if no one resists the riot police, the thinking goes, Ukraine will be turned into one large prison in a matter of weeks…

We are defending ourselves, our country, our future, Europe’s future — some with Molotov cocktails, some with knitting needles, some with paving stones, some with baseball bats, some with texts published on the Internet, some with photos documenting the atrocities…

Recently, some unknown thugs in civilian clothes kidnapped an activist and spent the night torturing him, demanding: Who is funding the Maidan? Which Western sources? Is it the State Department, or someone else?

The regime’s mental system of coordinates cannot fit one simple fact: The Maidan funds itself, through its own love and its own hatred.

I have never loved my homeland as much as I love it now. Before, I had always been skeptical and restrained toward it. I am 53 years old, and had long put sentimentality behind me.

But these days I see our women, young and old, sorting with amazing efficiency the donated medications and food supplies, I see hipster students in hockey masks and camouflage pants fearlessly going onto the frontline barricades, I see our workers and farmers providing security for the Maidan protesters, our grannies and grandpas who keep bringing more and more hot food to Independence Square, and I feel a lump in my throat.

[Yuri Andrukhovych is a poet, essayist, translator and the author of the novels “Perverzion” and “The Moscoviad.” This article was translated by Vitaly Chernetsky from Ukrainian. To read his entire article, CLICK HERE.]

If you were a chief of police in a city experiencing protest such as this, what would you do now that things have severely escalated?

How do you see your role as head of police in your city with regard to public protest?

What could you have done earlier to prevent the violence?

An important update today from by Prof. Gary Cordner:

1. There’s no chief of police for the city. It’s a national police. Also that Berkut is a semi-separate entity. I’m told they are mainly recruited directly out of the military, without any real police experience or training. And when they’re called in, they mainly come from elsewhere, i.e. they are not of or from Kiev.

2. Lots of news reports also indicate the “titushki” play a big role as strikebreakers etc. These aren’t police or even government employees, rather they are hired for muscle and are in plain clothes. Lot of “sportsmen” and ex-military, typically from eastern Ukraine, the region where the President comes from, the region that leans toward Russia.

3. There are also a lot of reports that pro-democracy forces are infiltrated with extreme nationalists & neo-nazis. Those sentiments run strong in western Ukraine, the region that leans toward the EU. In our eyes this side is the good guys, but a lot of them are probably unsavory too.

4. My information is that lots of “real police” have refused to participate in any violence and are just as pro-democracy as the protestors. That’s why the President has had to use the Berkut and the titushki to try to crush the protest.