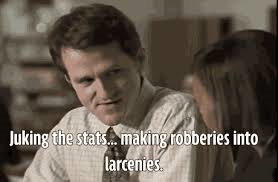 Another installment in a growing problem — Can you believe politicians or police chiefs when they tell you crime is down?

Here’s the latest from Chicago. When top bosses pressure local police commanders to keep the numbers down, they go down.

Here’s a fact: top down authority will not reduce crime, it will only reduce the numbers that are reported.

Chris Hayes, reporting on crime in Chicago for MSNBC, found this out.

Reported crime numbers are not real because what you see are only the number of offenses that are 1) reported to the police and 2) the police, in turn, report to the government.

A lot can go wrong along the way.

Out east they have a word for it and its called “juking the stats.”

From my book, Arrested Development:

“In a recent interview, veteran journalist Bill Moyers talked with David Simon, creator of the popular HBO series The Wire. Simon, a former journalist and police reporter, talked about evaluation. Simon mentioned the propensity of corporations, governments, and their agencies to “juke their stats”—that is, to alter data so that it appeared that they were doing well, even when they weren’t. The following dialogue is from an episode from The Wire, in which “Prez” Pryzbylewski, a cop turned teacher, has an exchange with the school principal about numbers and teacher evaluation:

“Principal: So for the time being, all teachers will devote class time to teaching language arts sample questions. Now, if you turn to page    eleven, please, I have some things I want to go over with you.

“Prez: I don’t get it—all this so we score higher on the state tests? If we’re teaching the kids the test questions, what is it assessing in them?

“Teacher: Nothing—it assesses us. The test scores go up, they can say the schools are improving.  The scores stay down, they can’t.

“In his interview with Moyers, Simon further reflects on his life as a journalist and police reporter:

“You show me anything that depicts institutional progress in America, school test scores, crime stats, arrest reports, arrest stats, anything that a politician can run on, anything that somebody can get a promotion on. And as soon as you invent that statistical category, 50 people in that institution will be at work trying to figure out a way to make it look as if progress is actually occurring when actually no progress is… a police commissioner or a deputy commissioner can get promoted, and a major can become a colonel, and an assistant school superintendent can become a school superintendent, if they make it look like the kids are learning, and that they’re solving crime. And that was a front-row seat for me as a reporter. Getting to figure out how the crime stats actually didn’t represent anything, once they got done with them.” [2]

“The fact is that none of us can make a valid judgment one way or another when it comes to analyzing reported crime as the data are presently collected.”

The point I am trying to make is that there is a big difference between REPORTED crime and ACTUAL crime. Again, as I wrote earlier in my book:

“I spent a good deal of my time as police chief trying to teach members of the media, as well as elected officials and community members, what exactly crime was and what it meant. To remind them that a numerical increase or decrease didn’t necessarily mean that crime was actually up or down. I didn’t juke the stats nor pressure my officers about reducing these imaginary numbers.

“A reported numerical increase (as the UCR shows) could instead mean citizens have more confidence in the police to solve crime, and therefore are now reporting it. On the other hand, a decrease in the rate of reporting could indicate not that crime is down but that police are underreporting various crimes by labeling them as lesser offenses; a practice which many believe to be standard operating procedure in most American cities today.

“For example, an attempted burglary might be classified as a vandalism; a forcible rape as an assault; a homicide as a sudden death. Each of these instances of downgrading would move a crime from the UCR’s closely watched eight Part I Offenses category to the lesser considered category of Part II Offenses.[1] A decrease in reported crime could also mean that citizens have less confidence in the police to do anything about it and, therefore, simply don’t bother to report it.”

The fact is that none of us can make a valid judgment one way or another when it comes to analyzing reported crime as the data are presently collected. However, there are more valid statistical methods in existence to determine actual, not simply reported, rates of crime. This method uses a statistical sampling of citizens, rather than relying on offenses that are reported to the police and that the police in turn report. Yet America and their police still are wedded to this archaic method of data collection and evaluation in spite of the existence of more effective and truer methods of measurement.

See earlier blogs on this topic:

What About Compstat and Crime Reduction?

A Short Primer on Crime Numbers.