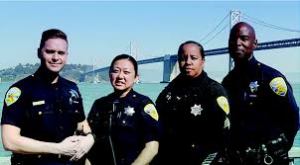 I know you feel anxious today. Perhaps even wondering why you took the job.

I remember a similar time during the riots of 1967-68; particularly in Detroit. I was working as a police officer a few hundred miles west of that city in Minneapolis. I was a street cop, walking a beat in a predominately black district. I heard police in Detroit were being shot at, injured, and some killed. It was a tense time in America. I have to admit it raised my wariness and anxiety level as my city was also experiencing racial violence and tension.

On one hand, I could think of myself as a potential victim in a city not too unlike Detroit; a city with African-Americans just as concerned about their lack of civil rights and victims of our systematic unfairness. After all, any police officer, then or now, is an easy target. There was little I could do hide myself. On the other hand, if I let my fear determine my behavior, I would end up doing as little as possible or quitting. I knew that was wrong thinking.

What I did choose to do, however, kept me safe during those times and positively influenced the rest of my 33-year police career: I decided to connect; to get closer, not further away, to those whom I was serving. I knew I had to reinforce the fact in my district that I was a cop who was fair and respectful. I had to remind folks in my neighborhood that they could count on me to be so — regardless of what was happening across the country.

I was not going to let myself get into a “war;” or into a defensive mode, with the people I swore to serve and protect. When the going seemed to be getting tough, I ramped up my contacts on the beat and in the community center which was the hub of my neighborhood. It worked. It worked then and I can confidentially assure and counsel you it will work for you today. The worst thing you can do is to “hunker down,” limit your community contacts, police from a distance, and let fear drive you. That’s very dangerous.

“Closer” helped me solve the crime and conflicts I came across, but it also resulted in my feeling and being much safer. We came to know and understand one another.

I knew the cultural gap in America between those of us who were white and those who were of color was enormous, but I saw it can be overcome. While most of my life was spent in white neighborhoods and schools, four years of my life wasn’t – that was my active duty time with the U.S. Marines.

You see, when I joined them and went off to boot camp, I was no longer in the majority. I had to learn to get along or fail. The Marine Corps in 1955 was a cultural melting pot; a “Berlitz-style” immersion project. And I got immersed and melted. Diversity matters in the military and it still matters today — especially in our police ranks.

While I will argue against the militarism I see creeping into police ranks today, my military actually helped me when I found myself in a police uniform working in a predominately black neighborhood. When we attempt to bridge the cultural gap between races things seem less scary. When we experience diversity, everything doesn’t seem so frightening. But it has to begin with us and maintained by us.

Later in my career when I became a police leader, the same technique worked for me when I was called upon the handle protests and demonstrations – closer is better; closer means dialoging, working things out, trying to understand one another and what our goals and objectives are. My experience in these matters also helped when I went out and recruited police officers to diversify my department among communities of color. When I said I needed their help and we can’t do this without them they believed me.

Connecting with the today’s widespread media output and listening to what some police and politicians are saying is déjà vu to me. I’ve heard it all before. Emotional statements with little or no data to back what was being said. And if we let these reports of so-called targeted police killings drive us away from those whom we serve, it will take decades to recover if we ever will. Yes, there are crazy people out there who may seek to kill us. It’s always been that way. We knew that when we accepted the call.

Looking back over 50 years since I first pinned a badge on my blue shirt, working through the Civil Rights Movement, sit-ins, and anti-war protests, then leading change, and continuing to study and write about police after my retirement, I have learned some things about police work.

You must be getting the picture, policing is overwhelmingly relational; in order to be an effective police officer in the past, present, or future requires us to be experts in that field – able to listen well, communicate effectively, continue our learning, be respectful regardless of provocation, fair, trustworthy, honest in our dealings, and able to use force carefully, even surgically. (As Sociologist Egon Bittner once reminded us, force is the core of the police role — therefore it must be applied properly and well.)

If you can hone yourself into being that kind of police officer, work to maintain not only physical, but mental/emotional fitness, you will survive – in fact, you will thrive and, in turn, be respected and counted upon. Policing is an honorable profession that calls us to be men and women of integrity. Never forget that.

As that kind of police officer, you will come to understand the causes of the problems you encounter and will work with members of your community and elected officials to solve them. They are the problems of disparate educational outcomes in your schools, the need for economic development, jobs, and healthcare for neighborhood children and those addicted to alcohol and other drugs; in short, helping craft together a positive future for those who live on your beat.

Early in my leadership career I envisioned the following for my city’s police to a group of community leaders.

It was in the 1970s. This, I said, is what we had to do to move forward. I suggest they are the same things you need to do today: