“Developing a high-quality, 21st century police agency begins first inside individual leaders before any changes should be undertaken inside the agency or within the community.” 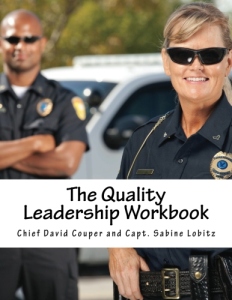 The Quality Leadership Workbook was first printed in the 1980s as part of a major change effort within the Madison (Wisc.) Police Department. We determined that in order to move forward we needed to improve leadership within the police department. The Workbook became a center stone of that effort.

Later, it became the text I used in teaching “Quality Leadership” to interested police agencies throughout the U.S. on behalf of the International Association of Chiefs of Police (IACP).

The Workbook was updated and new material added in 2014 and again updated and new material included after I taught a new course last semester at the University of Wisconsin (Platteville campus) entitled “Police Leadership in Changing Times.” The most recent updates are applicable for current police leaders, officers interested in become formal leaders, and students of criminal justice.

Quality can only come from the “inside out” — that means the importance of preparing the inside of the organization before major organizational changes are made. But this inside preparation is not only about the organization but about individuals within that organization.  This means police officers and their leaders need to develop their Emotional Intelligence as part of those first steps.

Improving one’s EMOTIONAL INTELLIGENCE and practicing PROCEDURAL JUSTICE is one of those first steps an organization takes in delivering higher-quality, trustful police services.

Therefore, developing a high-quality, 21st century police agency begins first inside individual members before any changes should be undertaken inside the agency or within the community.”