“I’m sorry, Chief, you’re wrong. Everything you and your department does is negotiable!”

I don’t know how many times I have heard police executives use this phrase when responding to citizen inquiries about police practices. For the most part, it is a version of: “We’re the police and you’re not!”
Both statements are unacceptable in a democracy. When it comes to the actions of our public institutions, everything is negotiable. The saying, “We’re the police and you’re not,” directly challenges Sir Robert Peel’s 7th Principle of Policing: “The police are the public and the public are the police.”
Even before Ferguson, too many police leaders have responded to public concerns (primarily in their use force) by trying to end the conversations by stating, “We followed the law, our policy, and our training — our actions appropriate and legal.” In most cities that response ends what could have been a very productive and trust-building effort.
People who have been injured by police, the grieving family of the deceased person, find no one in governmental interested in continuing a dialogue centering on whether what the police have done is acceptable or appropriate — not withstanding police policy, training, or even the law! The question should be whether or not this is how citizens wish their police to conduct themselves.
The most obvious example today is the low standard and therefore protective mantle that the USSC decision in Graham v. Connor provides police officers who use deadly force. This rule is essentially “if police officers fear, they can use deadly force.” This is a decision that has been identified by even police leaders as “awful, but lawful.”
While certain behaviors in our society may be lawful, that does not mean it has to be accepted and the police could, as many our their leaders have already stated, require a higher standard within their ranks. (Note: This would be similar to what was done in the 1970s when many states permitted police to use deadly force to stop any fleeing felon and many of us implemented policies within our organizations that restricted its use to only “fleeing dangerous felons.” Years later, the USSC would decided in Tennessee v. Garner that what we had decided became the new standard.)
Police chiefs who members of the Police Executive Research Forum (PERF) have themselves issued a report on use of force which calls for just that — the raising of the Graham standard.
As to police chiefs barring the door with regard to community dialogue about their policies and practices, I have to emphatically say “bullish__t!” In a free and democratic society such as ours, it is the duty of the police to ask for real discussion and input and public’s duty and right to tell the police how they want them to behave. 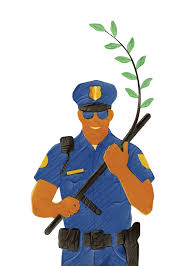 [Ed. Note: My thanks to Prof. Barry Friedman and his new book, Unwarranted: Policing Without Permission, Farrar, Straus and Giroux, 2017. Prof. Friedman firmed up much of the thinking that I and many other police reformers had been talking about since the 1970s regarding transparency and accountability in the policy making process. As early as 1974, Madison Police had delivered their policy manuals to the city library and all its branches. “We police with the consent of those whom we police.” That must, again, be the core of American policing.]