This might be a strange comment from a guy who carried a firearm for most of his adult life – as a marine and then as a cop. Peacekeeping has been a process for me. And, yes, it’s difficult.

If my wife or one of my children were being threatened would I use force including even that which took another life? Of course. Remember, I am trying to become a peacekeeping, not necessarily a pacifist (which is even more difficult!); nevertheless, I try. 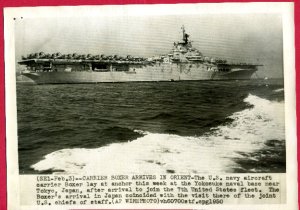 How did all this start? It’s all about what happened to me over 60 years ago — it involves coral islands in the South Pacific, a bunch of sailors and marines, and a hydrogen bomb (actually 35 of them!). 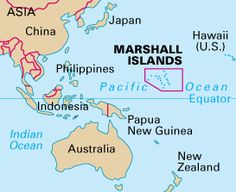 I was a member of the Marine detachment aboard the USS Boxer, a WW II-era aircraft carrier. We were detached to the Marshall Islands in order to participate in what was called “Operation Hardtack:” 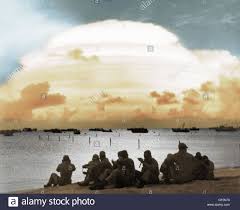 “Operation Hardtack I was a series of 35 nuclear tests conducted by the United States from April 28 to August 18 in 1958 at the Pacific Proving Grounds. At the time of testing, the Operation Hardtack I test series included more nuclear detonations than all prior nuclear explosions in the Pacific Ocean put together…Operation Hardtack I was directed by Joint Task Force 7. JTF-7 was a collaboration between the military and many civilians, but was structured like a military organization. Its 19,100 personnel were composed of members of the US military, Federal civilian employees… 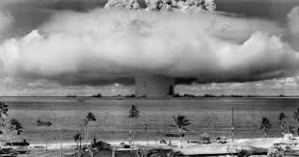 “There were three main research directions. The first was the development of new types of nuclear weapons… The second research direction was to examine how underwater explosions affected materiel, especially Navy ships, and was performed by the DOD. The tests were named ‘Wahoo’ and ‘Umbrella,’ the former was conducted in the open ocean whereas the latter in a lagoon.The final avenue of study was to analyze high-altitude nuclear tests… and investigate defensive practices for combatting ballistic missiles…”  (Wikipedia)

At this time, I was assigned to the Captain of the ship as his orderly/aide. This enabled me to be present on the bridge of the ship during many of the nuclear tests in which we were engaged – including the detonation of the 6th largest hydrogen bomb ever. 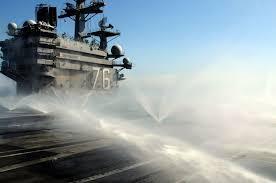 On board our ship we all wore film badges to calculate the amount of radiation we were experiencing (since that time, the records have been lost according to DOD). Our ship had a water protection system installed which was to to wash off radioactive fallout – or so the theory went.

It was during one of the 35 detonations (this one underwater) that all my prior thoughts about the efficacy of waging war –its engagement and futility — all came crumbling down. It was one of those shocking, life-changing revelations. That event impacted the rest of my life from that day forward. 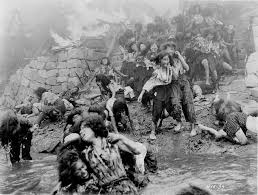 After the detonation (I think it was about 20 kilometers away), I could see the fabled Hiroshima “mushroom” slowly rising out of the depths of the ocean. I could just barely see a couple of spots, mere specks, on the very top of it. I asked my captain about it. “Take a look,” he said while handing me his binoculars. When I did, I saw that the “specks” on top of the water mushroom were ships — and one was an aircraft carrier! 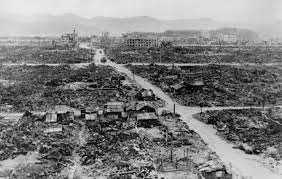 The enormity and finality of such power overwhelmed me. This led me later read the accounts of John Hersey and others on our use of a much smaller atomic bomb on the cities of Hiroshima and Nagasaki. If you have not read these accounts, you should.

Today, we have weapons that make those WW II-era bombs seem like hand grenades. And while we can see the horrors of My Lai Massacre in Vietnam fifty years ago, we forget the thousands of civilians immolated in those two cities (see the sidebar pictures). It is still debatable whether those two attacks 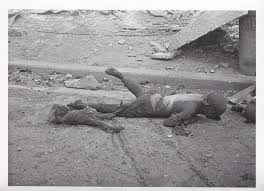 against civilian, non-combatants were necessary or not. Our national position was that “these bombs saved a million lives by not having to invade the island of Japan.”

While I think of those desperate days of WW II in which I experienced as a schoolboy, I still wonder if whether or not we could have used one of those bombs as a “show of force” against an island held by the Japanese military. To me, that would have been the moral alternative to literally exterminating two populated cities. 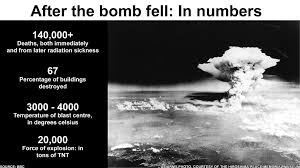 Later, I wrote a poem about this. I called it “Decalogue.” The third stanza has to do with Hiroshima”

sprout out of the land

they watched a triune parachute

gospel the new bomb to destiny

a head turns to look

brittles off and dusts to the ground

a mouth opens to speak

puffs away on a breeze

they do not look

they do no speak

every generation has a buddha

While I trained to be an accomplished warrior, teaching fellow marines self-defense and bayonet fighting, reading the official plans and outcomes of the War in the Pacific, I began to lose faith in the efficacy of war in the Atomic Age.

More recently, the dialogue and Twitter exchanges between our President and the leader of North Korea, Kim Jong-Un, got me worrying again as to whether or not we had learned anything in the ensuing years since WW II.

It has been a journey that has taken me into the marines, out into police, and now into the clergy. Each part of that journey involved an exercise in examining the values I held and how I wanted to live them. Peacekeeping seemed not only good foreign policy, but how I wished to live my life in relationship with others — including how I operated as a cop on the street. 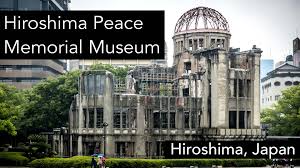 Part of the journey involved actually visiting the atomic bomb museum at ground zero in Hiroshima with my family in 1990. It was a very emotional visit.

I questioned, did we do this in my name?

Theologically, most of the enduring world religions believe in peacemaking over the conduct of war. They acknowledge a God of Peace, who  created and wishes to preserve and raise up humankind.

Peacekeeping, and its corollaries — conflict management, de-escalation, and talking things through, seems to make sense to me after all these years. I believe it takes more courage to be a cop dedicated to “keeping the peace,” than one who’s option to quickly use force to resolve a situation.

A number of years ago, I served on the board of directions of the International Committee for the Peace Council went on peace missions to Cambodia and Chiapas, Mexico. It was then I also joined the international organization Veteran’s For Peace. These activities also formed my peacekeeping journey.

Every cop knows other cops who are extremely good at this. They are informal leaders — their example needs to be observed, learned and practiced.

I came to learn that violence is not the answer. It could also be your journey. It takes work. It will not be easy. But it will help you become a better person and police officer. Press on.