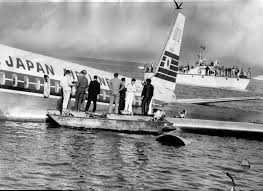 Years ago, Peter Senge recounted the following incident in his book, The Fifth Discipline: The Art and Practice of the Learning Organization.

In 1968, Captain Kohei Asoh landed his Japan Air Lines DC–8 jetliner two and a half miles short of the runway out in the waters of San Francisco Bay.  He made a perfect three–point touchdown.

Fortunately, the bay is only about 10 feet deep at that point.  The crew remained composed and the 96 passengers were uninjured and quickly rescued.   A hearing was held.

The captain was summoned as the first witness.  The chief investigator, imagining the usual excuses, rationalizations and finger pointing, asked Captain Asoh, “In your own words, can you tell us how you managed to land that DC–8 stretch jet two and a half miles out in San Francisco Bay in perfect compass line with the runway?”

Captain Asoh’s response, though never recorded in the official hearing minutes went down in airline folklore:  “As you Americans say, Asoh fuck up.”

Since there was nothing more to investigate, the inquiry was quickly concluded and Asoh sent back to Japan where it was assumed he would be stripped of his command and demoted.

But Captain Asoh was permitted to continue his career after a medical examination.  He flew continuously for Japan Air Lines until his retirement in the 1980s.

Why?  Learning organizations practice forgiveness because making the mistake is punishment enough.

Within the police field we have had some discussion about medical “Sentinel Events” (no shame, no blame, just fix it!) and the effort of the aeronautical industry to look at mistakes with the intent not of blaming, but solutions and prevention.

Would this approach be applicable to mistakes in policing?

How about if someone dies during the incident?

Here’s three earlier posts of mine on organizational errors: