NOTE: Another article about police militarization, not about the equipment, but about the mindset; the “attitude” of which I have written before and, in the meantime, Grossman’s training continues to be questioned. 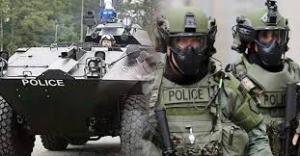 Militarizing the Minds of Police Officers

“Three years ago, amid the protests erupting in the streets of Ferguson, Missouri, President Barack Obama ordered a review of a federal program allowing military equipment to be transferred from the armed forces to state and local police departments. For many, the images of local police dressed in camouflage and travelling in armored vehicles became a metaphor for the ways in which the lines had blurred between civilian law enforcement and the military—a phenomenon that the journalist Radley Balko has referred to as the ‘rise of the warrior cop.’ The review resulted in an executive order that curtailed the transfer of some types of military equipment. A new short film by Craig Atkinson, ‘Conditioned Response,’ which includes unreleased footage shot while filming his documentary ‘Do Not Resist,’ from 2016, suggests that the armored vehicles rolling through Ferguson were only the most visible indicators of this militarization. Another, more subtle—and perhaps more intractable—form of it is affecting the psychology of the officers themselves.

“For the past two decades, David Grossman, a former Army Ranger and self-described product of a law-enforcement family, has been conducting police-training seminars on the use of deadly force. Policing is a complex job that at times requires split-second decision-making. More often, though, it requires a reservoir of knowledge about social interaction and human behavior, and the ability to read situations that may become violent. Officers are granted a great degree of latitude in their work, partly because interacting with the public requires more nuance than any rigorous set of codes could possibly hope to encompass. Grossman’s ‘Bulletproof Warrior’ philosophy, however, dispenses with these gray areas. Here the war on crime is not metaphorical; police are a kind of domestic militia tasked with subduing a potentially lethal enemy. Danger is ambient, ever present, and unpredictable. (Grossman did not respond to a request for an interview.)

“Grossman’s seminar exists at the opposite pole of the current drive for criminal-justice reform. While progressives emphasize police training to de-escalate conflict, Grossman’s seminar pushes officers to become more comfortable with the use of deadly force. As Grossman informs one group of attendees, “only a killer can hunt a killer.” Killing is a central theme of Grossman’s seminars but is only a fractional portion of law enforcement’s responsibilities. The vast majority of police in this country never use deadly force in the course of their careers.

“Jeronimo Yanez, the police officer who fatally shot Philando Castile, in Minnesota, last year, belongs not only to the small percentage of officers who have killed civilians but also to the much larger group of officers who have attended Grossman’s seminars. He reacted quickly, interpreted an otherwise calm moment as the paramount danger, and fired seven times into a vehicle with a four-year-old girl in the back seat. A jury determined that Yanez had not committed any crime, but, at the very least, no reasonable person would understand his handling of the situation as good policing.

“Last year, sixty-three police officers were killed by assailants who used weapons—but a thousand people were killed by police, and a hundred and seventy of those people were unarmed. If there is, indeed, a war, it’s an asymmetrical one.”

Jelani Cobb is a staff writer at The New Yorker and the author of “The Substance of Hope: Barack Obama and the Paradox of Progress.”Read more »