“The goal for police officers is to voluntarily give permission to one another to intervene when a colleague’s career or freedom is about to be jeopardized by what they are about to do.”

Most of us know about the “Code” that resides within police subculture. A good share of it is important and ethical; like being your brother and sister officer’s keeper during challenging times.

While few if any police officers would ever abandon a fallen comrade, many may still refuse to intervene when they see that fellow officer about to do something illegal, foolish, or even just plain stupid! Supporting one another is good. Lying, condoning illegality, and failure to intervene is not.

Police subculture can be loosely defined as a set of beliefs, attitudes, and behaviors exhibited by those who work in law enforcement — both positive and negative. Because law enforcement officers spend the majority of their time dealing with crime and other unseemly, and sometimes hostile behavior, they tend to view other, non-police, as untrustworthy and potentially hostile.

I just spent a couple of days with Mike Quinn this week. Mike is a retired police sergeant from Minneapolis who is on a mission to be his brother’s and sister’s keeper and train others to do so.

Mike Quinn entered the ranks of the Minneapolis Police Department in 1975 after serving in the military. He served the city for 20 years and during that time worked in a variety of assignments in both uniform, plain clothes, and Internal Affairs.

After promotion to sergeant, Mike supervised the Robbery Decoy Unit and the Repeat Offender Program. He also did two short tours in Homicide and spent his last four years as a supervisor in the police academy where he oversaw the training of over 350 recruits.

Mike also was a member of the Minneapolis Emergency Response Unit (SWAT team) for 17 years and served over 350 high risk warrants as a team leader. He has been an instructor in teaching police use of force, firearms, chemical agents, and executing high-risk warrants.

In 2005, Mike wrote and published the first edition of “Walking with the Devil: The Police Code of Silence.” The third edition “The Promise of Peer Intervention” came out in 2016. He also contributed to a monthly column on police ethics on Officer.com for a number of years.

In 2016, working for the DOJ and under the New Orleans PD consent decree, he trained the first class of instructors in “Peer Intervention for Law Enforcement.” New Orleans calls this highly successful program “EPIC – Ethical Policing is Courageous.”

Mike is passionate about teaching police officers an important addition to The Code. (A side-note is that I worked with Mike’s dad when I served on the Minneapolis PD in the mid to late 60s!)

Mike is a stand-up guy and a cop’s cop.

These are notes I took during his presentation Tuesday to my students:

Peer Intervention is about Officer Survival! When doing the right thing means protecting other officers and their families.

What’s really dangerous about policing, an officer’s biggest threat? Is it being shot and killed in the line of duty? Or something else?

So, where should the most present danger, the greatest to a police officer’s career and health reside?

Mike states that the goal for police officers is to voluntarily give permission to one another to intervene when a colleague’s career or freedom is about to be jeopardized by what they are about to do.

Isn’t that against the CODE?

Sometimes the only thing a peer officer needs to do is give is a firm statement that he/she won’t lie for a colleague if they continue their course of action.

What Mike proposes is an addition to the CODE, an “Oath of Honor,” and “Promise,” making them part of the police subculture:

The Oath of Honor

[Peer Intervention gives every officer PERMISSION to intervene, regardless of rank, when they observe behavior in another officer or employee that could bring dishonor to the person, their family, or their badge.]

My sense is that this can be a way forward for police; a way to restore trust, support, and confidence among the communities they serve and among those men and women with whom they work. 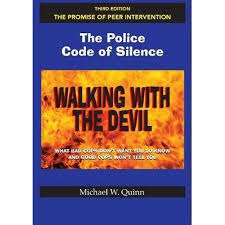 More about Mike and his work: