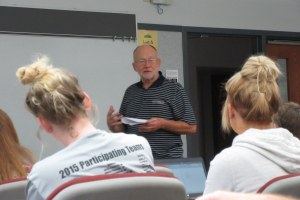 I have taught cops for most of my life. And it wasn’t any easier when I was a chief.

Over the years, I have taught students as well as junior and senior police officers. There’s challenges there, too. Cops (and sometimes those learning to become cops) are a tough audience. That’s why identified this as an obstacle to police improvement in Arrested Development.

anti-intellectualism; one of the four major obstacles to police improvement along with violence, corruption and discourtesy.

“The negative spirit of anti-intellectualism presents itself in a number of ways in American policing. It begins with low educational standards for police applicants. Then in police training as the classroom curricula are more oriented towards high school than college. Within police operations, new ideas and creative approaches are neither sought nor encouraged. When it comes to police operations, traditionally-based past experience is valued more highly than research or experience gained by others outside the field— even if it works…”

Even when academia attempts to prepare young people for police careers, some of them either come with, or acquire, this attitude. Both police and students have those among them who, with arms crossed, radiate — “You’re gonna teach me? Change my mind? Just try it.”

As I travelled the nation teaching a new police leadership method and applying Deming’s system of quality improvement, those cops were present, they showed up and neither I (nor anyone else) was going to change their minds or teach them anything new. Thankfully, those who wished to learn something new and make personal change always outnumbered resisters!

While there is no intellectually-driven “body of knowledge” in policing today, many effective policing strategies can be found, for example, at the online POP Center. The solutions these working officers have presented are often not empirical, but informed, job-related findings that can be used by police across the nation. While these findings are subjective in nature, they meet the standard of practical knowledge — effective responses to hundreds of pressing and routine police problems. Until a better source is found, they serve as a body of knowledge for police. In the meantime, today’s police should continue to press for more “evidence-based” solutions to today’s problems.

Be aware that many police leaders develop policies and practices which require their officers to act in ways more restrictive than existing state laws (past examples are restricting high speed vehicular pursuits, prohibiting the use of deadly force to stop fleeing, non-dangerous felons, forestalling arrest when encountering persons with small amounts of drugs). They didn’t have data to come to these decisions, but they listened to what their officers and citizens said when they were asked and they made decisions about how best to fix that which was in need of improvement.

The goal of teaching cops, or those who want to be cops, must always be to identify effective ways for police to be more trusted, respected, safe, effective, and community-focussed. The evaluation of that goal must be by those who are directly impacted.

As I learned years ago, only a customer can judge the quality of a service — including police services. That’s why, in the coming years, police must become experts in asking, listening, and responding to citizen-identified problems –and that’s being intellectual!