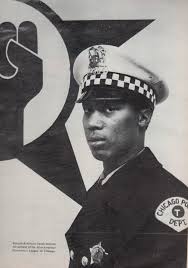 Renault Robinson in the 60s.

This interview and others that Terkel recorded for his book, Working, were boxed away in his house until recently, when Radio Diaries and Project& combed through them and produced a series of audio stories, Working Then And Now. Thanks to the WFMT Studs Terkel Archive and the Chicago History Museum. More stories from the series are also available on The Radio Diaries Podcast.

I remember talking with Renault when he came to Minneapolis in the late 60s to talk with either our newly-formed police fraternity or, then perhaps, it was to talk to a class I was taking at the University of Minnesota.

Robinson’s comments from the late 60s portrayed a different day when blacks simply were not accepted into policing. That time has changed.

But how he describes the relationship between police and the black community today has not.